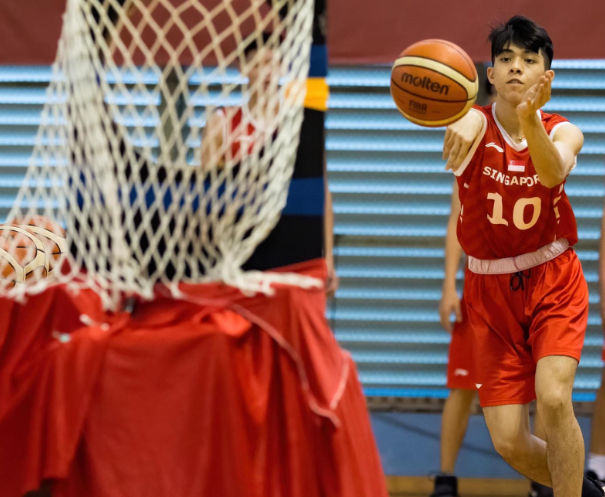 This article was first published on TheHomeGround: https://www.thehomeground.asia/singapores-u17-basketball-teams-keep-it-physical-in-the-fiba-online-challenge

The COVID-19 pandemic has only hastened the imperative race to go digital. But for industries like sports, digitisation efforts have come with a compromise — a drawing back on the inherently traditional aspects of physical competitiveness. While certain sports have shaken things up by making players pick up their joysticks to partake in esports tournaments, the International Basketball Federation (FIBA) has found an ingenious way to keep things in the flesh even within a digital competitive landscape: check out the FIBA U17 Skills Challenge 2020.

The Singaporean Men’s and Women’s U17 teams took part in the international challenge, with the Women’s team qualifying for the finals with an outstanding three wins against Fiji, Samoa, and Papua New Guinea. The Men’s team also saw a notable victory against Fiji, although they subsequently got eliminated in the first round. Charting remarkable progress, the Women’s team eventually lost to Lebanon in the finals of the U17 Skills Challenge Asian Qualifiers with a score of 136-155.

Paired with a deeply simplified concept, the U17 Skills Challenge is accessible on Youtube, making now a better time than ever for Singaporeans to jump on supporting local sports teams.

How the U17 Skills Challenge works

Split across the four geographic regions of Africa, Asia, the Americas, and Europe. The U17 Skills Challenge is a timed challenge that involves five players, each taking turns to complete a lap of various tasks with a basketball, including layups. The challenge is somewhat reminiscent of exhilarating secondary school sports day circuits. Upon submitting their recorded laps, teams with the best timing and point scores emerge victoriously.

The competition’s format is relatively straightforward, and perhaps even easier to follow than an ordinary game of basketball. With that said, it comes with a different set of challenges, devoid of the overbearing presence of having a live audience watching your every move. But in this instance, players don’t have anyone to share their missteps with, given that they go one at a time.

“Some of us felt less pressured without a physical audience, while some felt more eyes on them through the screens. Personally, I felt it was more pressurising, especially being the only person on the court when playing,” said Natasha Sanghar, Captain of the Women’s U17 team in Singapore, who deeply enjoyed the experience.

Victory and defeat away from opponents

With the FIBA U17 Skills Challenge, the tables are turned for players. They observe and sit on the tension of outcome the same way that their audience would. And taking the immersive, boisterously loud setting of a live match out of the equation, victories and defeats don’t pack nearly as much of a punch.

“Naturally, the feelings of victory and defeat were not as strong, as the results of our games were not released immediately. Additionally, because of how new this challenge was, we were largely uncertain of the standards of other countries regarding their performance during the Skills Challenge,” Natasha pointed out.

But players were all the closer to their friends and family, who were ever-able to support the players online. The virtual nature of the challenge meant that players were not alone in charged physical territories when competing.

“When my family and friends knew that I was going to represent the country, they all told me not to give up even if we lose, and not to care about the result of the game too much,” said Mah Jun Hao, Captain of the Singaporean U17 Men’s team.

“Because of the unfamiliarity with the virtual nature of the challenge, I understand that some couldn’t comprehend the mechanics of it, but were supportive nonetheless,” said Natasha.

The future of physical sport in digital worlds

While the digital nature of the U17 Skills Challenge may make it seem smaller than it really is, the reality is that it gave Singapore’s players an opportunity they may otherwise have had to spend a lot of resources on.

“It was a fantastic opportunity for the team to gather for training and take part in a competitive international event without the need for travel in these uncertain times. Kudos to FIBA for coming up with this initiative, and hopefully this event continues in future years,” said the Basketball Association of Singapore.

And where the future of sports is concerned, FIBA’s ingenious extraction of the basketball’s physical elements is what makes this sustainable in space-robbing times such as these. As much as it demands different things from players, and perhaps even robs the sport of its magic, the formula can only get better. Players can keep training at basketball, and it’ll be a long while before they feel the need to turn to NBA 2K20 as the only possible digital alternative to their sport.

“Although we can’t practise or play as before, we still enjoy the time when we get to practice and play together,” said Jun Hao, expressing his support for the U17 Skills Challenge to remain a fixture. 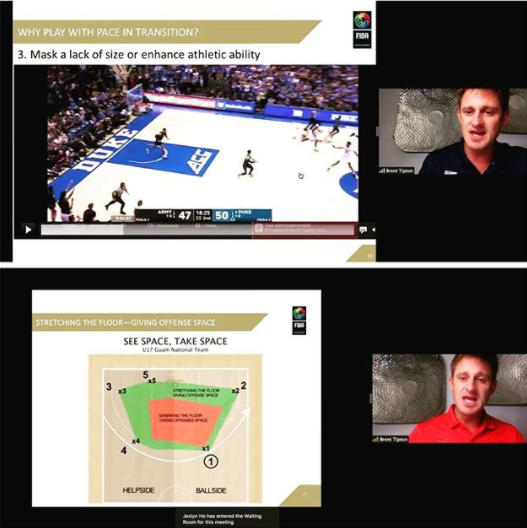 The webinars touched on developing transition offense on transition defense. About 40 coaches attended each day of the webinars.

Thank you to Brent, FIBA in Singapore and the attendees for making the webinars a success!